Just because Obama and the democrat’s have been quiet about “Gun Control”,  as far as media exposure goes, does not mean they have not been working behind the scenes, both on National and State levels too! It is well known one of Obama’s goals, while in the White House, is to disarm as much of the general public as he can.

?Obama is right in step, with those below, when comes to disarming the citizens of this Constitutional Republic. 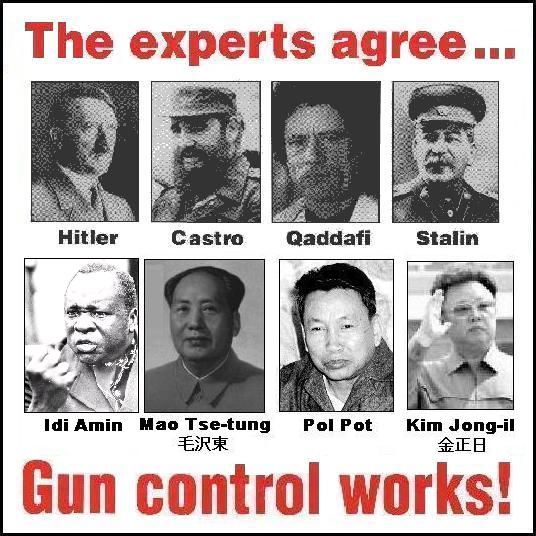 Obama has many goverment agencies working on various programs that would restrict or eliminate the sale of ammunications over the internet and being sold across state lines. Read about Obama’s Gun Control Plan and decide for yourself. In the meantime Obama has instructed the BATEF to attack the importing of shotguns… Read the article below…

As we reported on Jan. 28, May 1 is the deadline for public comments concerning a shotgun importation ban that has been proposed by the Bureau of Alcohol, Tobacco, Firearms, and Explosives. A working group within the BATFE has recommended that any shotgun (semi-automatic, pump-action or any other) that has any one of 10 specific features should be banned from importation, on the grounds that such shotguns are not “generally recognized as particularly suitable for a readily adaptable to sporting purposes.”

The features in question are a folding, telescoping, or collapsible stock; a magazine of over five rounds or a drum magazine; a flash suppressor or a muzzle brake that also suppresses flash; an integrated rail system other than on top of the receiver or barrel; a light enhancing device; a forward pistol grip or similar protruding part; an “excessive” weight of over 10 pounds; an “excessive bulk” of over three inches width and/or over four inches depth; a bayonet lug; or “a grenade-launcher mount.”
The working group considers “sporting purposes” to be limited to hunting, skeet, trap and sporting clays, but not to include practical shotgun matches or recreational target shooting. To have considered practical matches, the working group said, could have led to conclusions that would undercut the BATFE’s 1989 and 1998 bans on the importation of semi-automatic rifles, and its 1993 ban on the importation of various semi-automatic pistols. The working group also indicated a reluctance to accept practical matches because they test defensive firearm skills, which the working group believes are of military and police orientation.

Since the law conditions a firearm’s ability to be imported on whether it is “generally recognized” as meeting the law’s sporting purpose test, it is important that the BATFE hear from members of the general public. Particularly relevant will be the comments of people who use shotguns equipped with one or more of the features for hunting or any form of competitive or recreational target shooting, and people who adapt such shotguns to a sporting purpose by simple modifications, such as attaching or removing a flashlight, attaching or removing a forward grip, or installing or removing a magazine extension or magazine plug.

Comments to the BATFE may be submitted by e-mail to shotgunstudy@atf.gov, or by fax to (202) 648-9601, and must be received by May 1, 2011. Faxed comments may not exceed 5 pages. All comments must include name and mailing address.