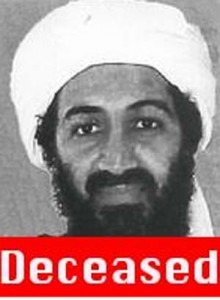 Shukran (thank you) to the United States Navy Seals  for killing the cowardly murder and Islamic terrorists pig Osama Bin Laden. Bin Laden, and a number of his close comrades including one of his sons, was taken out Sunday by an elite team of Navy Seals along with members of the C.I.A. in a daring attack on a fortified compound in Abbottabad Pakistan, just 30 miles from Islamabad. Bin Laden’s compound was surrounded by the Pakistan armies training camp and a number of military bases.
The report late last evening indicated Bin Laden was shot in the head almost decapitating him. He will not get his 72 virgins , what a shame!
The fact is we should all thank our beloved president Barack Hussein Obama II for NOT keeping his campaign promises to close Gitmo  and remove out troops from the mid east. As we have all learned the information that lead to Bin Laden’s death was from an inmate at Gitmo. It took years to trace the information and boots on the ground in both Afghanistan and Pakistan to make this happen. If Obama had his way this information would have been lost and Bin Laden would still be alive. One more thing, Let’s be clear on this : OBAMA did NOT kill Bin Laden. An American soldier, who Obama just a few weeks ago was debating on whether or not to PAY, DID! Obama just happened to be the one in office when our soldiers finally found OBL and took him out. This is NOT an Obama victory, but an AMERICAN victory!!

Bin Laden is another example of a follower of the Qur’an and why he proves the Qur’an is the Islamic Terrorists manifesto! 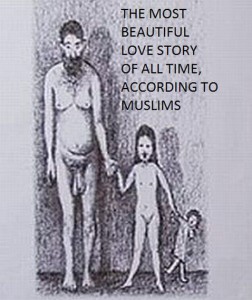 While Mohammad, the pedophile prophet who is credited for being the founder of Islam, ascended on a winged horse, we will all take solace in the fact that Bin Laden will be carried to the black depths in the jaws of a shark with his remains be devoured by the bottom feeders of the ocean. No shrines or places for Islamic terrorists to go to “pay their homage to a fallen martyr”..

Don’t be mislead my friends. Bin Laden was forced into hiding years ago and has undoubtedly had a very small roll in current terrorist’s activities and Al Qaeda, the terrorists group he founded. This well timed “kill” comes at a time in Obama’s political career when he needs all the help he can to retain his office in 2012 and there is no doubt in my mind he will milk this recent event for all it is worth. there is nothing sacred to Obama and he will waste no time exploiting Bib Laden’s death.  BTW… Do you know where Obama was when our soldiers were going into harms way? PLAYING GOLF! The question is, “how long have we known where Bin Laden has been hiding and why have we waited until now to take him out”? The answer will come over the next few weeks as the media digs deeper into this and we see how many “I’s”, “me’s and my’s” Obama uses in describing his role in Bin Laden’s killing.

Remember, “Your rights begin and end at my nose and toes”… “Don’t Tread on Me” or my “God given rights” to live as a “free man” in a “free society” under the rule of law.